The update to Ranger class is finally here and ready to be tested! Verlyrus, Dracelix, Ashendal, Niki, and more have worked hard to bring you this newly reworked class! If you have a Dragon Amulet, you can log in now and find the armor button in your Book of Lore! Let us know what you think on the forums!

There are also two new randoms in Duat, in the Book 3 Sandsea! Talk to the Scarab Guards to see what they need help with and to collect Shards of Obsidian for new ring and weapon rewards! 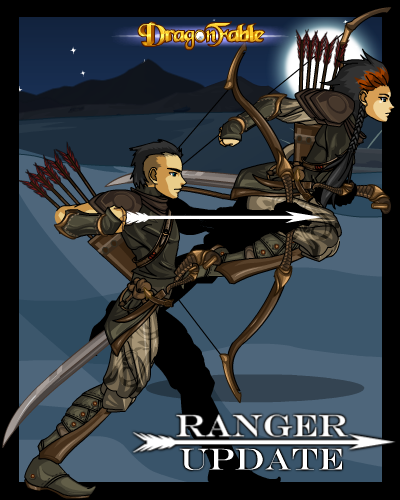 First Look at the Ranger Skills

Today I'm going to give a "quick" rundown of what you can expect from Ranger's skills!

First things first, I want to make sure it's clear that the names and numbers of these skills are very much still in development. I'd love to hear your feedback about them, but please keep that in mind!

Let's start off with the "Melee" category attacks. These attacks are offensive melee abilities that will generate melee focus (name pending).

1: Attack
Everybody's favorite big red Attack button! That's right, the normal attack will help build your melee focus up!
This attack does a hit of 100% damage.

2: Dual Wield
Quick onslaught of weapon and dagger.
A solid damaging attack on very low cooldown.
This attack does 2 hits of 60% damage each.

3: Armorslash
Cut off a section of your opponent's armor with a precise slash.
An offensive debuff skill.
Hit for 100% damage, and reduce enemy resistance to All by -20 for 5 turns.

Melee focus provides a stacking buff of 5 bonus to hit per stack, up to 5 stacks. If you have maximum stacks of Melee focus, you'll have +25 Bonus to hit!

Next up are the "Defense" category attacks. These are defensive melee abilities, and will reset both your melee and ranged focus after use.

1: Quick Reflexes
Channel your mind into a state of concentration, gaining supernatural reflexes for a short time.
Gain +175 avoidance for 4 turns.
Avoidance is your Block, Dodge, and Parry stats.
This translates to about an 80% chance to avoid damage.

2: Cripple
Impair your opponent with a well placed sword thrust. A guaranteed dodge if you land the attack!
Gives your enemy -100 to hit for the next turn.

3: Kick
Kick your enemy in a weak spot!
Lowers enemy damage by 50% for a few turns.

4: Recover
Take a quick rest and heal up while your trusty Hawk companion distracts the enemy.
2 hits of 40% damage, and heal 50% of your maximum health.
Very long cooldown.

These defensive skills are very powerful, but have the major cost of destroying your focus, which in turns lowers your damage output by quite a bit! Speaking of damage...

We have the Ranger's bow skills in the "Ranged" category! These are offensive skills that focus on buffs and damage. They will increase your Ranged Focus when used.

Now, to the skills!

1: Viper's Arrow
Shoot a deadly venom tipped arrow at your opponent.
Does 1 hit of 50% damage, and applies a DoT of 50% weapon damage for 10 turns.
When you hit a target who already is affected by Venom, the DoT gains strength, up to 150% damage per turn. (The duration does not reset when hit).
No cooldown.

2: Power Shot
Shoot a powerful focused arrow at your opponent!
1 hit of 120% damage on a very low cooldown.

3: Flashbang
Flashbang's functionality has been changed from before. Your flashbang now disorients and stuns the enemy.
1 hit of 25% damage, 3 turns of stun.
Flashbang does NOT reset focus!

4: Tracker's Shot
Shoot a tracking arrow at your enemy, making them easier to hit for a while.
1 hit of 75% damage with 100% bonus to hit. Gives the hero +50 Bonus to hit for 5 turns. The bonus to hit stacks with Melee focus!

5: Spotter's Shot
Shoot an intentionally off target arrow to distract your opponent, revealing their weak points.
1 hit of 75% damage. Your next attack will be critical.
Very low cooldown.

Ranged Focus increases your critical hit damage by a whopping 25% damage per stack, up to 5 stacks. However, unlike other classes, Ranger starts out doing 1.75 times normal damage on crits rather than 2 times.

That said, when you have max stacks, not only is your critical hit damage 3 times normal damage, you also have a 50% chance to get another attack each turn. (Only one bonus attack per turn :P)

This leaves one last skill: Purge!

Purge:
Purge is unique in that it does not increase focus or reset focus. What it does do however, is for this skill only, double the effects of Focus on you. So at 5 stacks of Ranged Focus, you'll get a bonus of 4.25 times damage.
Purge always critically hits, and does two hits of 75% damage.

Non-Dragon Amulet players will have access to only the "Ranged" attack category, while Dragon Amulet holders will be able to access the "Defensive" and "Melee" categories, as well as Purge.

Again, all of this is subject to change, and I'd love to hear your feedback.

That wraps up the Ranger's new skills! Let me know what you think on the forums!

Ranger is being redone to be a ramping up offensive class. This means that while you may start out weaker than other classes, the longer you're in the heat of battle, the stronger you get.

How does that work, you ask? Well, let me introduce you to the Ranger's unique class feature.

As you use certain melee skills (including the big attack button!) you build up melee focus, which increases your chance to hit your foes.

When you use your ranged attacks, however, you build up ranged focus, which will increase how much damage you do with critical hits!

But wait, there's more! If you reach maximum ranged focus, you gain a 50% chance to attack twice in one turn!

If you use a defensive skill, such as crippling your enemy with a stab, or kicking them in a weak spot so that they're weakened for a couple turns, all of your focus resets back down to 0.

You'll want to ramp up and hit hard and fast, but it's very risky, since if you find yourself in a bad spot, you'll lose the advantage.

Another feature of Ranger is the damage bonus. Ranger is by nature a rogue-ish explorer kinda class. Not particularly magical. As a result, you'll gain a small amount of bonus damage for having STR or DEX as your main stat. But if you invest equally (or close to equally- your level divided by ten, then rounded up) in both STR and DEX, you'll get a larger bonus!

And no, you cant cheat it by having them both at 0. :P

It's been a long time coming, and I hope you're all as excited as I am!

The Fight for Late Night

The mics are getting warmed up, the lights are getting focused, and two new bards have rolled into town with a challenge for Sir Stephan of Coldbear. Coming soon, in a special Tuesday release on September 8th, who will win the Fight for Late Night?! 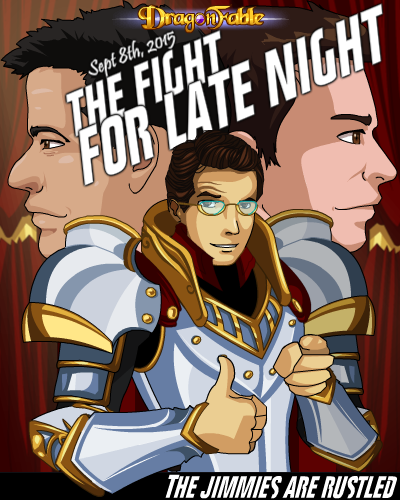 Hey everyone. I know this is rough news, but it's got to be shared. Currently, we do not have the resources, time, or access required to make the Create-a-Quest system into the robust system that we want it to be.

As a result, it is hereby postponed until further notice. We're not sure if we will revisit the project in the future.

I know this was a much anticipated and requested feature, and I'm as disappointed as many of you are.

I also know that you all have amazing ideas and stories to tell. If you want a great place to share those stories, you can always post them in the DragonFable Legends & Lore section of the forum here. Don't forget to make a forum thread for discussion here. You can also post your artwork on the forums here.

And as always, you can discuss all things DragonFable on the forums here.

Thanks for being so understanding.

Next Roirr quest is live!

It's a cutscene-type quest, heavy with story. Go to the travel map, click other continent and select Tkaanie. 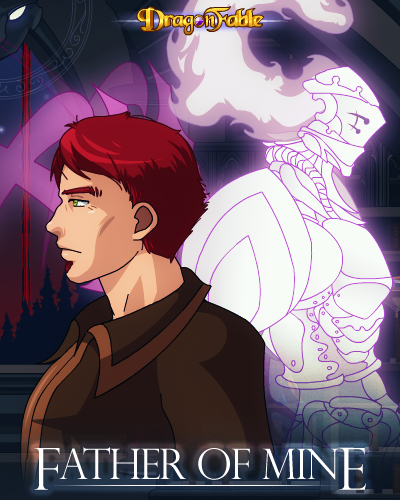 This weekend a new minihub has been set up outside the southern Falconreach gates in Book 3! Log in now to speak with the mage, Gingkage, and her enormous wolf, Blaze!

Something has been terrorizing the farmers between Falconreach and Swordhaven. Will you be able to find it and stop it? Or are you just going to be lured into the depths of Betrubung? 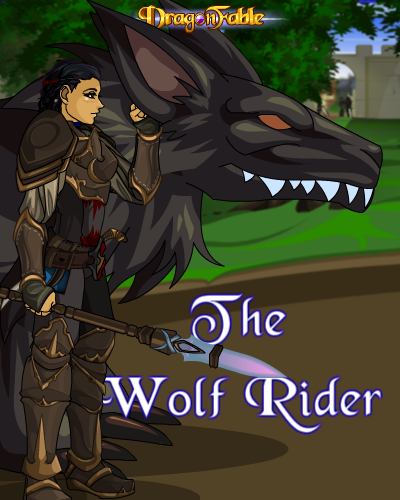 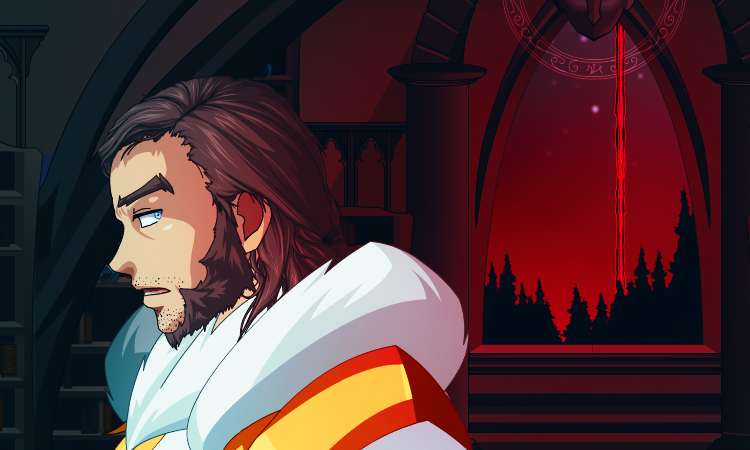 After all your exploration and discovery in the Deadlands it's time to find out what is happening right now with Caitiff and the cultists! You'll need to find an old "friend" to get some answers and their help with spying into the Shadows!

Be very careful though... enough mistakes and you'll get... it's attention. 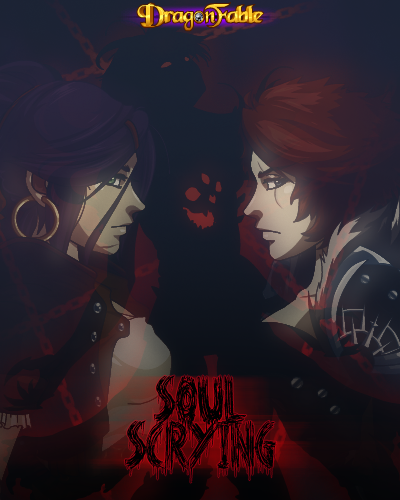 The Friday the 13th releases seemed to be fraught with misfortune! We need a little more time to get some polish on the scrying runes but the main quest will be available tomorrow!

In the meantime, Dracolich Fishing is now live in Book 1 for those of you far enough along in the storyline! This was meant as an alternative for those of you who didn't want to risk the dangers of scrying... but, the good news is I've been wondering what severals years of decaying darkness would do to the denizens of the Bay... and it's not pretty. I'm going to push to try and get Book 3 Dracolich Fishing ready for you guys for tomorrow too so that those that don't want to scry can fish up some... unappetizing alternatives.

Scrying in the Shadows

You've found out about Serenity's past life as Dyana, Jaysun's Shadow Cape, the bloody history of the warlod Valtrith clan, and the Cultist massacre at Castle Nostromo by the Void Queen. Now, you need to find out how the Cult survived and thrived after waking Dyana, why Dyana ended up in Falconreach to start a new life as Serenity, and what Caitiff has been doing after Jaysun took that life from Serenity. You'll also need to track down an old... friend to answer a few questions about wars long past.

Be very careful, though, you'll need to use all your concentration to scry using those Darkness runes. When you peer into the shadows, one mistake, and a Shadow might peer back at you.

Warning: This quest may be too scary for those that suffer from heart conditions, asthma, or any type of mental, physical, or respiratory problems!

with Darkness Runes you will scry

be careful not to catch her eye

if she sees you won’t escape

descend to Shadow and meet your fate 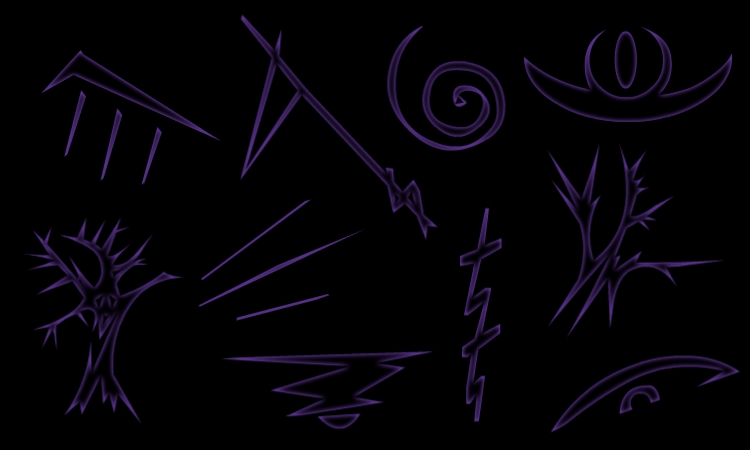 Today's release is none other than a Verlyrus the boxcat quest! 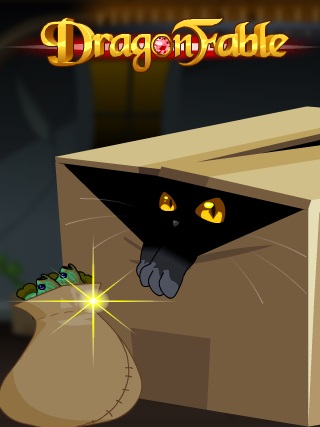 Greetings! Today we've got some fun stuff for you.

First up Geo was doing some work on the base classes and has updated the faces! She took a few snapshots to give you an idea of the differences. 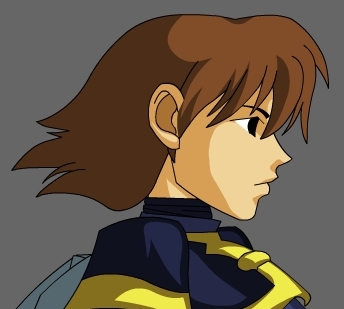 We're still working on the quest for you guys! The map is huuuuuuuge and so is what you're going to be facing.... We need a little more time before everything will be tested and ready for you all!