In the twilight darkness of the Croft woods nothing... living... stirs. The woods are silent except for the hero breathing. A full moon grins crazily overhead. Then... a shuffle... a groan...

The infected are coming!

How will you fight off their legions? Tomix has created a special Zardbie themed scythe for tonight's creepy Limited Quanity Shop! At 6pm, EST, 2000 of these infectiously, horrifyingly cool scythes will be available for 400 Dragon Coins each.

Wooooooow! So much stuff tonight! We have:

On Monday the 2011 masks will be available in Cysero's Superstore for those of you who have one particular one you'd like to wear year round as well!

True Mortal Saga: Origins
Unfortunately, Nivalis seems to have a hand in keeping back this quest! Eric is working hard on getting it out to you guys but, with 46 rooms, this quest is a huuuuuge undertaking and we want to make sure that everything is working properly before you guys get lost in the fortress! We'll get it out to you guys as soon as it's ready.

*Plus one messy set from me!

That poor candy scaredcrow can't ever go outside or the birds will eat him! Luckily, he seems to have a flair for hair.... With tomorrow's release he's going to have ten new hairstyles in the Croft barbershop! Remember though, Croft is a seasonal town... so these spooky styles will fade back into the mist eventually... at least until the Cauldron Sisters come again.

In a Cave Somewhere Hiding from the Sunlight...

It was a long hard and really weird week last week.  As you know, the quest I had been working diligently on was overwhelmed and devoured by digital demons… actually come to think of it… that’s not quite the right way to put it.  You see, the quest wasn’t devoured so much as UBER condensed.  When it came out the other side and opened for TM it was one background with some really bizarre code in it.  Either way it’s the same… the quest was utterly unrecognizable.  So, I started over.  Thursday night.  At six pm.  I worked all night to rebuild it.  Unfortunately in my haste, some vital bits of code(?) were placed in really awkward positions.  Most of the final stuff was actually done Saturday, however, the misplaced bits were badly misplaced, and some adjusting is going to have to be done.  To that end, the release will be delayed till Friday, so we can ensure that the quest doesn’t seem so rushed. (Even with the errors I am still learning more and more, and this was truly a learning experience)

Now I shall slip off to a serene place and resume working.

Whew! It's been a crazy week! We have a new monster, new weapons and a whole new town for you guys to check out this week! Ghost did an absolutely amazing job on the monster I vectorized last weekend and the cutscenes look awesome! The walkaround for Croft, created by Tomix, is also available. Just visit Chapter 6 of the Mogloween Book after completing this weeks quest! Right now, it's only the walkaround, but that Scaredcrow will be open for business soon!

Eric Greydawn, True Mortal and Tomix worked very hard on the next TM saga quest, Origins but, unfortunately, they ran into some issues which couldn't be resolved intime for the release tonight.

The Kensai is exhausted.

Yesterday morning, those most horrendous of Oni... the dreaded deadline demons attacked.  Their victim; the new TM quest.  The datafile got scrambled.
The quest file was useless on my end.  That only left one option... start over.  I spent some VERY long hours trying to get this up and running.  TM stepped in to help
as well.
Unfortunately, there was only so much I was able to do in the time I had, so Origins will be released tomorrow.

Code Monkey Got Up, Got Coffee

So where have I been?  Here!  Working!  Over the past few months, I've coded a new class, a bunch of new monsters, and a handful of new quest features, most of which involve making it easier to do things that we've had to avoid doing because they're so time intensive.  I've also been working on my own game.

Some of you've heard about PonyVsPony but I figgured I'd share a link for those of you who haven't.  It's a fun, addictive little puzzle game which was released at DragonCon this year and have been improving ever since.  I'm still working on making it as awesome as possible inbetween my various other projects here at Artix Entertainment. Be sure to check it out!  It features the awesome art stylings of Jemini and Yergen from the MechQuest and HeroSmash team.  Pony On!

But you guys are here for DragonFable news!  I've started working on playing through the entirty of DragonFable, all the while I've been making notes and marking down bugs to add to my todo list.  This project's a LONG term one, as DragonFable is a LONG game (3 hours in and I'm not done everything there is to do in Oaklore)  but it's already bearing fruit.  This week, i'm going to work on some of the Oaklore bugs I've found as well as changing Falconreach to make one of your favorite stories easier to find.

I'm also returning to the Player Created Content System that has been left to sit idle for too long.  Once I get back up to speed on that project I'll post a nice long design notes about how it's going to change moving forward, because I've got some big ideas!

I'm spending my Saturday working and lurking (the forums are making me crave bacon... ;)  /shakes fist!) and, well, this is just looking too cool to not share with you guys.

Thyton sketched up two new monsters for this years Mogloween storyline and, to help play catch up so that that Ghost can some sleep sometime, I'm vectorizing the first of them. Hopefully, I'll get it done in time for Ghost to color and animate (after he does the cutscenes and stuff for next week too!) since this is a little late for this stage.

I wanted to share it though because it just looks, as Chainsword would say, AWESOME! The second one is just as awesome too... and I'm so keeping that one a secret now! ;) 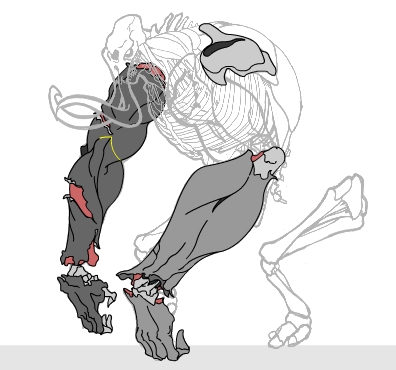 Whew! The second Mogloween quest for this year is finally out! Ghost did and aaaaamzing job on the cutscenes and the new zardbie monsters in the quest! It's crazy that we never made monsters out of them last year!

M.O.P. has been hard at work cleaning up and repurposing the old Parasol Mansion to house all of those displaced by last years zard invasion. They made sure that everyone bought into the area is infection free by the always accurate Grinder test. You can never be too careful!

This week we're really going to get into what's happening in Moonridge 48 Weeks Later! M.O.P. has commandeered the mansion on the outskirts of Moonridge and is repurposing it for all those displaced by the zard attacks last year. What could possibly go wrong?

We have lots of fun plans for the Mogloween arc this year! Thyton and Ghost are working on two new monsters, one of which we'll see next week, Tomix is making some beautiful backgrounds for Croft*, the Cauldon Sisters home, and True Mortal is working on a ghoulish weapon set for the final week. Tomix and True Mortal are also working on a while new crop of masks. What are you going to disguise yourself as this year?

Candy Buff!
The amount of candy you can get from houses from the 2010 Trick or Treating has been buffed! That buff will carry through to this years masks as well.

We're starting off this year's Mogloween by checking out what happened in an isolated little cabin in the woods near Moonridge last year. What does someting that happened weeks and weeks ago have to do with this year's event? Log in and find out!

enTropy Armor!
enTropy is now for sale in Cysero's SuperStore of Savings! For 1800 DC you get the raw destructive power of enTropy! Make sure to give us your feedback on the class in the Design Notes thread on the forum in case there needs to further tweaking!

In order to celebrate the end of Chapter One we're intoducing a special Dragon Coin Elemental Unity package! If you spend $5 for 1000 DC or $9.95 for 2000, you will also get the Elemental Unity trinket! This DC trinket does 200% damage and gives the monster -30 to hit, attacking with the Good element. This is also the only trinket that is usable by both free players and Dragon Amulet holders!

By their powers combined....