Greetings! Today we've got some fun stuff for you.

First up Geo was doing some work on the base classes and has updated the faces! She took a few snapshots to give you an idea of the differences.

And the new one! 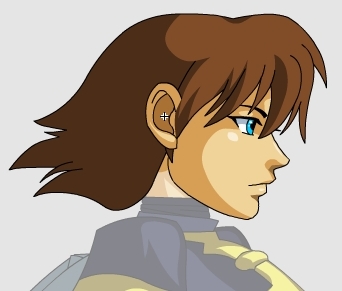 While she was in there tinkering to get that done she also fixed the issue with female base class faces not "showing emotions" as it were. There was an issue with them not showing things like a smile or a shocked face or anything like that. That might explain why a few of you were saying things like "my character never shows any emotion in cutscenes". Now at least the base classes should!

Next up the first of the new DC packages is live! The Grove Tender set comes with the 5000 DC package! Alina gave us the basic blade artwork, Geo made the helm and cape to match and I handled all the coding necessary to give it all the specials. Speaking of specials, this set comes with quite a few of them.

If you have the Helm and Blade equipped.
- Increases chance of a Crit on hit by 5%.

If you have the Cape and Blade equipped.
- Increases BtH by 5%.

If you have the Helm and Cape and Blade equipped.
- Increases chance of a Crit on hit by 8% and BtH by 10%

These stack to an effect as well. So if you have the Cape equipped to get the trigger bonus you not only get the +5% BtH but you also get the Beast, Bug, and Giantkind effects as well! The only exception to this is if the enemy has a resistance to Nature AND is one of the race types. The blade will pick the special based on the race of the monster before it attempts to use the Nature Resistance special. (Since the race specials are a lot stronger it makes sense not to have one of them overwritten!)

That's a lot of stuff right? This set makes you effective at "tending" to all of those monsters that are focused around Nature! The upgrades for these items are already at the Black Market Moglin in both Book 1 and Book 3 Falconreach so you can get versions close to your level right away. If you want to see how they look you can also do that there! I tried to make an image for Captain Rhubarb to include with the package itself and it's kinda small and doesn't let you see much so I didn't bother putting it in here. It's a lot easier to see them in game

Captain is also awarding the items to the couple of people who bought the package earlier today as you didn't know if was going live so you deserve the items as well. (No one else is on record as buying it in the past few days.)

Lastly I just added the Ancient Exoskeleton DC armor to Cysero's shop! (So if you buy the package and want to spend your DC's on something new, you can.) This is based off the titan fight armor that you use in the Castle Nostromo release as many of you requested that we make a version you can use all the time. I went ahead and made a full skill set for it. You can find the stats for it here! Tomix did the color and graphical alterations to the base mecha and I added all the animations and attacks to it that it used in the titan fight, as well as the few alterations to this armor to give it the full skill set. It's a hybrid armor but it's got everything a good armor needs to survive so it should hold up very well against all types of enemies.

Something to keep in mind though is this is based on a mecha from Mechquest. In Mechquest all battles are set in what I like to refer to as "set perspective". That means that every single mecha battle is the same size wise so all attacks are made to hit a certain area of the screen to "hit" the enemy. In DF there's "variable perspective". If you've ever done Voltabolt's Challenge where your character and guests and pets are a lot smaller than the monster you know what I mean when I say variable. Just like in Mechquest, all of the attacks for this armor are based around a set point on the battlefield, where the opponent would be standing. While this worked fine for the titan fight in the last quest, any battles where you aren't set at that same "set perspective" will cause you to notice the attacks hitting in front of the enemy. I can't fix that, please don't ask me to because I already tried to move them as best as I could. Please don't complain on the forums because I am warning you now about it before you buy it. If you are ok with that, and like the overall look and feel to the armor then feel free to buy it, but I wanted to make SURE people are aware of the issue with the animations so they don't try and get upset like what happened with Icebound Revenant.

If you do buy either the mecha armor or the package I hope you enjoy them! Expect a teaser of some sort for Verly's release at some point in the next couple of days!