In celebration of Halloween, TWO limited time Dragon Coin shops are available from the Book of Lore!

You can also find and upgrade your own mini Candemon pet from Mogloween Chapter 11 Trick or Treating! 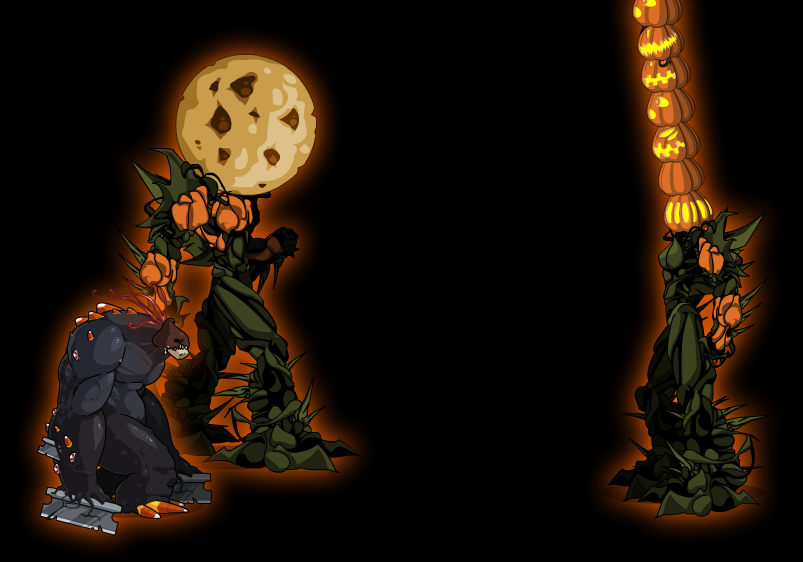 Have a safe and happy Halloween, heroes!

The time has come! 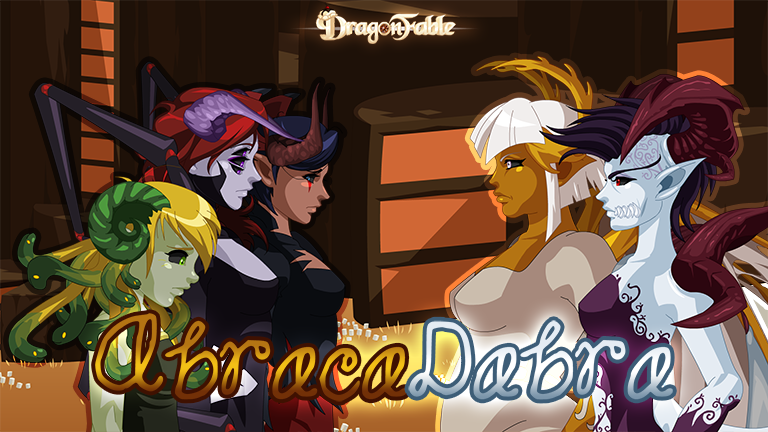 First look at Abraca and Dabra!

Are you ready to meet Abraca and Dabra in this week's Mogloween finale? 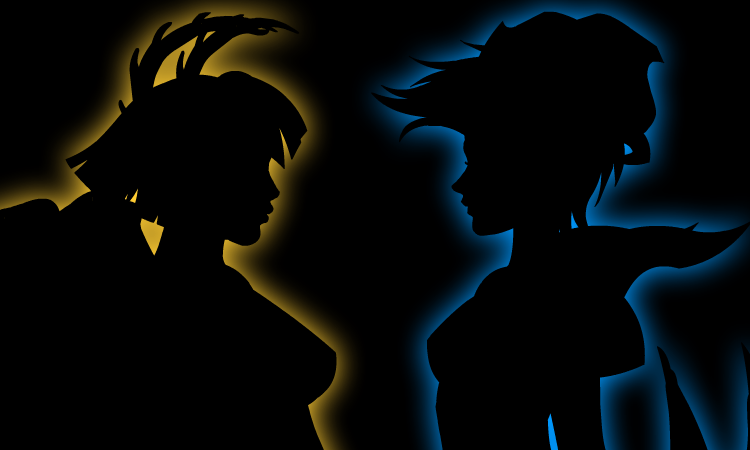 As you may have heard, the AQ3D Open Beta is live... but maybe it's too open? Strange things have been leaking into the world of DragonFable. Rare items that transcend dimension-

The Nightlocke items! These powerful items are NOT Dragon Amulet required, and are NOT sold for Dragon Coins! They come in levels 20,40,60, and 80, and rarely drop from the 1-dimensional quest- New Dimension.

There's a scythe, a staff, and a pet to collect! Good luck!

And check out the AQ3D open beta!

Last week, we journeyed into Apsaydaaun and discovered a whole other world full of candy and treats... that happens to want to eat you! This week, under the guidance of Myx and Trouble - and with the assistance of your faithful kitty companion, Verlyrus- you will travel deep into the Foulest, in search of the mysterious Abraca and Dabra, who have prevented Croft (and trick or treating!) from returning to Lore this year! 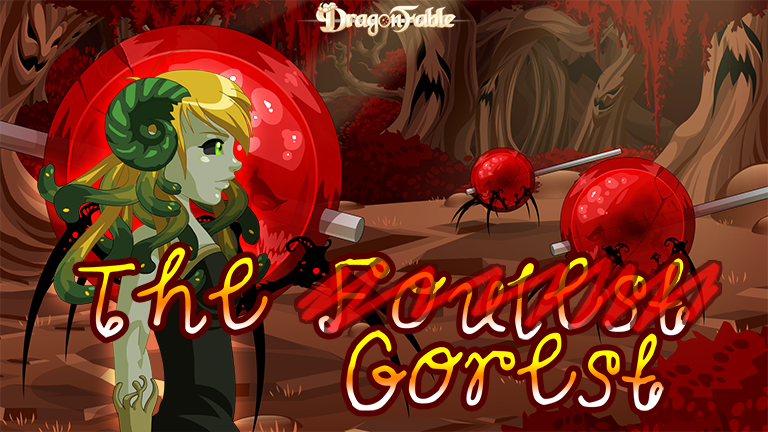 This week's DragonFable release is live!

Last week, you found out that Croft hasn't appeared in Lore yet this year. You went to find Bubble, and she gave you a list of ingredients to find to create a potion that would teleport you to Croft's original home: Apsaydaaun! 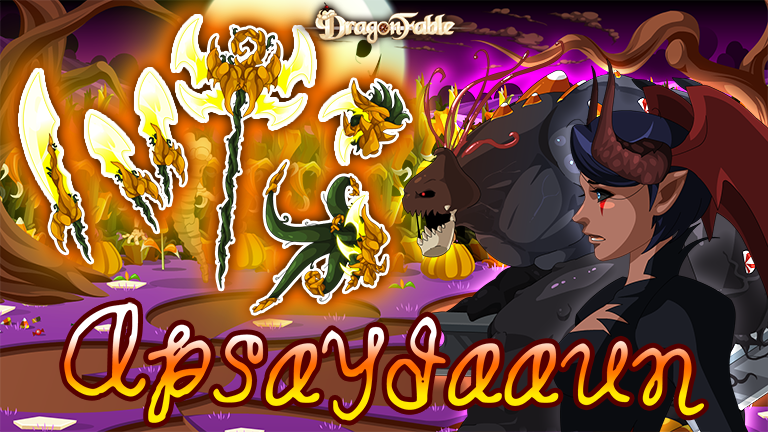 Starting October 18th-ish, 2016 It is almost here! This October, everyone will be able to join us as we continue creating AdventureQuest 3D. The release date says "-ish" because that is when we will start rolling it out onto each platform (STEAM PC/MAC, APPLE, ANDROID) and some will go live before others. Being able to login play your character on the same server as your friends no matter what device you are using was our dream goal... and it is happening! A True Cross-Platform MMORPG...

Thank you to everyone who made amazing project a reality. It is October.... and we have two magnificently dark and exciting releases coming your way. Also here is a few things to expect!

First, is ShadowSkull Tower which will open with the launch. Players will need the best items in the game and to work together to battle to the top of the tower. The floors of the tower are randomized. Some floors are puzzles, some kill-alls, and some mini-boss battles. At the top of ShadowSkull Tower you will find the NecroKnight-- and he has a surprise.

We will be celebrating our yearly tradition of Mogloween this year... but this is the first year it will be in 3D! Town will go dark and along with glowing pumpkins, a haunted house will appear. More on this coming later.

We have been carefully reading your feedback and re-re-re-re-balancing the game. This includes changes to crafting and being able to buy items with gold. Will it be perfect on launch? Heck no! But it will be an amazing start to a game that we are dedicated to working on as long and as hard as the previous two AdventureQuests-- which for the record are STILL updated every week :D

If you have participated in Closed Beta, you will be getting a shiny new badge for your character page. Want in Closed Beta before it ends? Then good news... follow my Artix Krieger Twitter and keep a look out for Early Access Key give aways.

Thank you for making this all possible. As you can imagine, our small team is going to be in hyper GO MODE these next two weeks! So much to do!!!! If you were not with us for the launch of previous games like DragonFable or AdventureQuest Worlds then hang onto your helms, it is about to get crazy. As the veterans will tell you things will change fast and frequently. It is vital that we go into Open Beta so that we can release the public version of the Apple iOS (Phone/Tablet) versions. Then, with AdventureQuest 3D playing on all of our 1st round targeted devices, and with your help, we can begin the sprint to LIVE RELEASE-- which I would love to see us hit Summer of 2017.

QUESTION: What device to you think you will play AdventureQuest 3D the most from? (Steam, Apple iOS, Android)

It's Time for Mogloween! ...right? 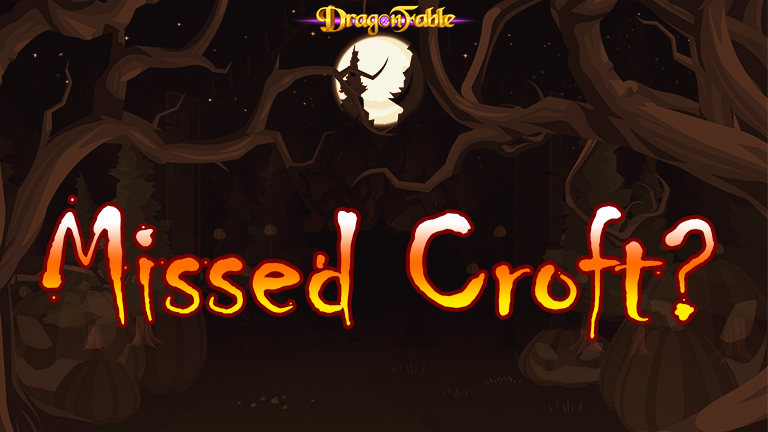