TimeKiller
For this TwT, we have the very first concept sketch for TimeKiller! The class will use two fast-shooting crossbows that shoot clock arrows! Tomix definitely has some wicked skill ideas for this year's calendar class, which you'll only be able to get if you get the 2013 Poster from HeroMart! 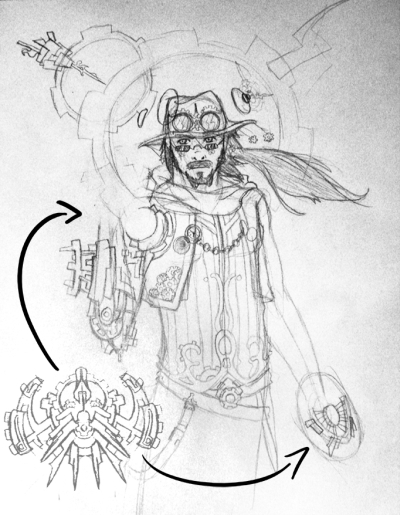 When you enter in your code, you'll get the mysterious Time Cube in your inventory that will evolve into the armor on January 1st!

Surewould Forest
The first portion of the Book 3 Surewould Forest walkaround was released on Saturday! With the walkaround were refreshed versions of two of DragonFable's classic random dungons, the Bandit Camp and the Waterfall Cave. We do have the option of replacing the art in the original versions of the randoms as well now buuuut, what would you guys prefer? Do you want to see the older art replaced as we go along as well?

Drop Shops!
As we add more and more levels to the level cap, loot tables getting a larger and larger range of weapon levels. We've also had a few quests where the loot table have become excessivly large with the amount of weapons (and weapon types) that have been available to drop. The idea has been put forth to start adding "drop shops" at the end of quests which would have the entire loot table available in the shop for a small amount of DC.

For example, if you're working your way through a new quest and want that level 60 sword, but you keep getting level 30 daggers, you could pay a small amount of DC (probably about 25% of what that level DC weapon would cost) and get the weapon you want without having to grind for it. It would have the exact same art and stats as the drop but you wouldn't have to grind for it (if you didn't want to) and, since you bought it with DC, you would have free storage for it!

What do you guys think? Is this something that you'd like to see?