Potion through the Pain

Did you see the pun I made there? Potion through the pain? Potion... pushing... hahaha, right? Ha ha? Ha? Right? See, I jammed my finger a week or so ago- my little pinky finger on my left hand- and it hurts every time I have to type the letter A. Which is a lot.

Rolith is glaring at me again. Puns make Rolith SMASH! (He and George Lowe get along really well.) But on to the meat of the delectable sandwich of information that is the Design Notes!

So, I have to ask. Do you feel lucky, hero? Well, do ya? If you don't, you should, because this is the start of the luckiest time of the year, and YOU lead a charmed life! For a hero.

This week, you're fortunate that we'll be releasing an Earth Orb quest, especially because you'll be heading back to Guardian Fortuna. But don't get too wrapped up in what you're talking about with her, because dark and deadly events will be going on while you're chatting about the weather, weapon polish, and Celestia's favorite tea.

We'll also be introducing the Lucky Storybook! Much like the Hero's Heart Day storybook, the Lucky Storybook will allow you to re-play previous years' Lucky Day events. Lukkhi the Sneevilchaun will be playing the part of Master of Ceremonies (and boy, did we have to promise him a LOT of gold to fulfill the role). 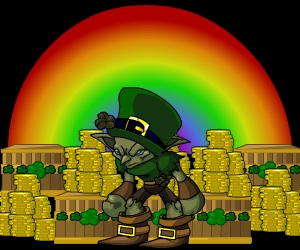 But that is only a lead-in to NEXT week, which really IS Lucky Week! We'll- well, ROLITH- will be very busy during Lucky Week, because he's going to be coding a new feature (or fixing a broken one) each day of the week! For example, a well-loved DC House item/function is getting a complete overhaul. That means five brand-new or unbroken features for you next week!

DISCLAIMER: Guilds are NOT coming next week! But somethat that might be even more awesome is. It's a surprise. I really can't share more. But you guys will play a LARGE role in making it successful.

To have an in-game frame-work for how we'll explain all these new features, we're going to have a WAR! But it's not going to be a war like any you've experienced before. It's a completely NEW style of war for DragonFable. And it will be Rolith's "Monday feature." So expect Lucky Week to start around late afternoon NEXT Monday!

There will be a brand-new cast of NPCs that Tomix and Ghost are making for the war. It'll star one of the least-favorite monsters, but they'll be shown in a whole new light and you'll gain an insight into their society. And you won't have to fight them. Isn't THAT fortuitous?

So grab your four-leaf clovers, strap on your shillelaghs, and don a dapper green helm, because the next Earth Orb saga and the start of (double) Lucky Week is happening THIS FRIDAY!

PS: Look for a new homepage banner to debut later today! Made by Xyo of AQWorlds' team! It's pretty fantastic!