Having found the ally you came looking for in the depths of the Third Floor of Espina Rosa, all you need to do now is make a run for it and get out. That should be simple enough, right?

Although you are sort of stuck in a dark maze that has been playing tricks on your sense of direction, whether or not you have any, more than a Minx Fairy after eighteen full heals. You did find that Elryn fellow though. He should have a map, right? Better than the last one you had, right?

And wasn’t there something about Navon, Dracelix and co. heading for Espina Rosa head on? The Prison that is not supposed to be stormed?

Oh boy. That could be a problem. But you have dealt with disasters before, haven’t you? Surely you can handle that? Yes, I am sure you will manage just fine.

You may notice while playing this quest that your choice of armour… may very well make one scene look positively odd. We had several options available to deal with this tricky part of the quest, all of which resulted in some advantages but also disadvantages, and namely for the players. It was decided then in the spirit of the whackiness of Dragonfable but also due how important the players are to hand freedom of choice to them.
So pick your whackiest, craziest armours suitable for the particular moment, or simply do not, and revel in the weird and funny feelings that come out of it. 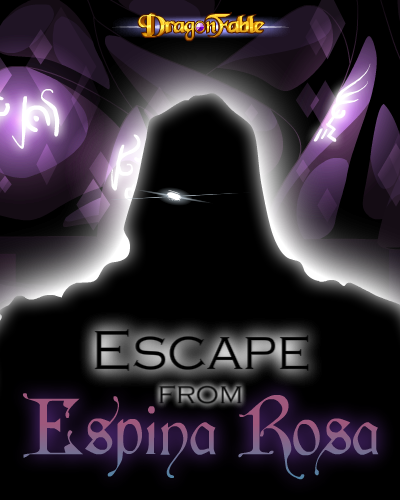 With Escape from Espina Rosa done, there is only one quest left before the Espina Rosa series is over and that the Hero moves on to Swordhaven. Before that happens I would like to know a thing of two.

I would be curious to know a few things on two elements that came out of the last quest. The first would be the unique maze like feature of the WAQ that was done. Was this too confuzing and unnecessary a feature or was it fun for a change of pace? Was the map too small or too big?

The other thing that I noticed from last quest’s release thread is that you seemed very much keen on figuring out riddles and puzzles that one might place in a quest. Would you ever be keen on having some actually difficult anagrams or puzzles that you could try to solve together like you tried in the last release even if breaking the puzzle might not give you much in terms of rewards? Although nothing is set in stone, I do fancy making puzzles some times.