Con, Quests, and an Answer

If you don't follow Artix or Cysero on Twitter, you missed one of the funnest and funniest parts of the rides to and from Dragon*Con!  They twittered the phone numbers of the public pay phones at the rest stops we took breaks at, and players from all over the country called and talked to us!  I hope we do that again next year, because it was awesome to get to talk to you guys!

Dragon*Con was AMAZING! (And not just because Rolith proposed, though that alone made the trip the most memorable I've ever taken!)  We saw SO many great costumes, had a lot of laughs, and even watched Cysero, Alces, and Electro's robot battle in the Robot Wars contest!

The last night was probably one of the craziest times. Rolith and I wandered around with Artix, Cysero, and Alces.  We snuck into a REALLY weird film festival (we tried all sorts of devious ways to open the door before we figured out we could just turn the handle and go in), then left that and went to watch anime music videos.  That was nice, except I am really far behind on my anime, so there were a lot of spoilers there. Then Cysero, Alces, Rolith and I left to go find crazyfungoodtimes.

Also, hotel carpeting is REALLY bizarre.  Who thought THIS pattern was a good idea? 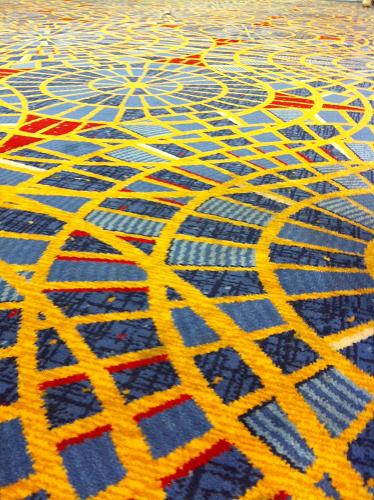 We wound up in the Gaming Room (full of like-minded gaming nerds playing anything from Werewolf to Magic to Settlers of Catan and beyond).  This was at around 2am.  Were we tired? NO! So what did we do?  Cysero and Alces signed up to battle Mecha in these huge pod-like contraptions that would immerse them in the battles.  Rolith and I waited with them for a little while, then wandered off to play Werewolf.

The silly villagers thought ROLITH was a werewolf (doesn't EVERYONE know the Pactoganol Knights have a "No Monsters" policy?  Gee, guess not!), so they lynched him. Too bad they were wrong! (That's what Rolith gets for not telling the truth in a more convincing manner. Never hestitate and don't be afraid to look an unwashed con-crowd right in the eyes!)  After that, we wandered back to Cysero and Alces and played card games with them for an hour or two.  The people next to us gave us Gift-pizza!  Free pizza is never unwelcome at Con at 4 in the morning. We lost Cysero and Alces as they finished up battling and headed to a rave. And a drum circle. And probably to get into more trouble that they didn't want to tell us about so that we weren't made accomplices.

Look for more stories of Con on the AQWorlds Design Notes page to come later in the week!

Now on to what to expect this week!

We will definitely have a DragonsGrasp quest for you!  After hearing the story of Vilmor and Donovan's exploits as children, your hero must have a pretty good idea about Vilmor's character.  Maybe!  Or maybe we still have a TON of surprises left for you in this awesome DragonLord-only chain.  I was talking to geopetal today and she told me about a scene she's envisioning for the end of the final quest.  I can't WAIT until you guys see it!

We'll also (hopefully) have Alina's in-game answer to the question Captain Rolith asked last week.  For those of you who read the Design Notes, you've already gotten your answer.  But for the DF players who only play the games, they've been left hanging.  I'll give you just ONE hint for what the quest will involve: "BARK!"

I hope you guys had a GREAT weekend.  I know we sure did!  I am exhausted.  I still need to go and pick up Kata and Rolith's kitties from the boarder.  Then go home and unpack.  And then sleep for a week.

Geo just pointed out that if I sleep until Friday, I won't get my quest done.  Sadface!  This is why I never take geo for granite, though.  She's a rock-solid boss!  AND tomorrow is her birthday, so happy birthday, pbl!

See you guys later on in the week!