The new Dragonsgrasp is live! Rolith has done some crazy things today for this release too!

As Circe taunts Vilmor from the shadows, Vilmor becomes enraged and ice bolts go flying! Take up the chase with Vilmor and try to catch up to Circe! You're going to have to fight off Circe's summoned Frost Shocks by yourself though because Vilmor is focused on one thing and one thing only... taking down Circe! 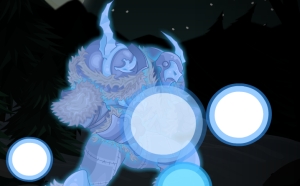 You might notice something strange during the battles too.... This quest is called The Chase for a reason! Rolith has once again tried to bend The Engine to his will by making you fight as you run. You might notice The Engine fighting back a little (i.e. there are a few graphical glitches still) but overall the effect is really cool.

Make sure to check out Alina's new quest as well! Those crazy togs have potion-master-napped her!