That's right, we've written a novel set in AdventureQuest during the time of the Great Fire War!

One of the most well-loved storylines in AdventureQuest's long history is the Great Fire War. Starring Galanoth, Demento, and YOU, the hero, as you battle against Akriloth and a host of fire monsters, this story has gone down in AQ's history as one of the most widely-talked about and reminisced-over wars we've done so far. But the story hasn't ended! Coming this November to HeroMart is Artix Entertainment's first full-length novel, The Dragon's Secret, and it is set during the time of the Great Fire War!

Written by Lyra Trice Solis, a member of the AdventureQuest storyline team, The Dragon's Secret tells the story of apprentice mage John Black, who loses his entire family to a dragon attack and vows to get his revenge, one way or the other. (A dragon? In the Great Fire War? Whoever could it be?) He doesn't think things can get any worse until he discovers a secret about one of his best friends which pushes his loyalty to the limit.

Come along with John and his group of incorrigible friends as they escape confinement, battle dragons, stow away on a pirate ship, face off against a terrible and evil mage, and confront the underwater Council of the Mer! Through the story, John must choose between revenge and friendship, and decide whether or not to risk everything to stand up for what he believes in! Filled with dragons, dwarves, and VERY dark magic, The Dragon's Secret will tell the tale of the Great Fire War in a brand-new and exciting way! 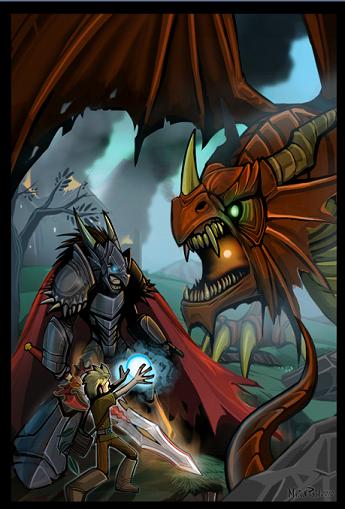 But it's not JUST the novel you'll be getting if you purchase The Dragon's Secret! You'll get something in AdventureQuest, DragonFable, MechQuest, and AdventureQuest Worlds!

In AdventureQuest, we're releasing a full quest based on the novel along with items like the Goldenrod Staff and Gnomish crossbow weapons (available in the quest) and the Unlight Shield and the Melore's Dark Statue spell (available ONLY with the novel promo code)!
DragonFable and AdventureQuest Worlds will be releasing non-member pets available to EVERYONE while MechQuest is whipping up an awesome Shoulder item.
And the best part is, you can get ALL of these items with ONE promo code!

This is our first ever novel, one you can hold in your hands and read in bed (or in the car, or in class... ok, maybe not in class) and we're VERY excited to be able to offer it to you! Remember, it's coming to HeroMart this November!

You can read sample text from the novel here!