The Beginning of the End of Magic!

Ghost, Tomix, Oishii, Dracelix and True Mortal have all been working hard on new art for Chapter 3 in DragonFable! I wanted to give you guys a little run-down of what to expect when Chapter 3 finally goes live, since we're picking the story up a few years after your character was frozen in place outside of Oaklore.

The Chapter 3 map will start with only Oaklore and Sunbreeze Grove (and possibly Falconreach*) on it.

Oaklore... well, as an outpost of Swordhaven, it has been welcoming to The Rose and the Mana Hunters. So much so that Rolith, Captain of the Pactagonal Knights, has relinquished his command!

You, being so close to Oaklore, haven't had the luxury of legions of mages working to get you unfrozen. Warlic, at least, had the chance to start you thawing before he made his escape to his tower! To get inside Oaklore's gates, you'll have to be a little elusive about how much mana you actually use... and help the Knights fight the last of the warring elementals and magical creatures in the area that The Rose has been working to capture. 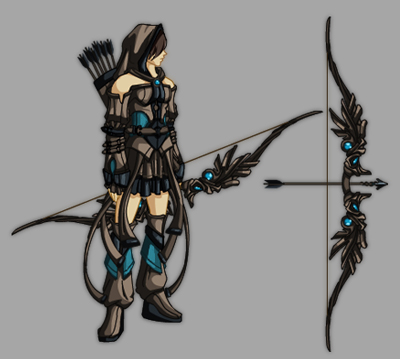 Falconreach is one of the few places in Lore where magic is still welcomed and, as such, is full to the brim of magical beings trying to find refuge. Even there, though, the cultists of The Rose rail against magic users and creatures. Falconreach and it's denizens still remember their hero though! Even after all the years you've been gone!

As Chapter 3 gets started, we'll soon expand towards Swordhaven... and the hidden wind elf resistance encampment on the way!

*Depending on how sick Rolith still is from the convention! D;