The military branch of the Rose is that is. Compulsed by Code Orange, they have but one, narrow goal: to capture whoever broke into the Runed Fortress and made cause for the code to be decreeted. To capture... The Rebels.

There is little or no time. There are portals to the island of the fortress and the Rose can reach Espina Rosa in no time at all if it wishes to. Although you might have been tempted to free more prisoners found or exploit the seemingly upper hand of the moment as Navon put it, to destroy or damage the reputation of the Rose through the symbol that is the Runed Fortress, the opportunity is not what it seemed to be. The Stars are not aligned in your favour, Hero.

Or rather, they have been aligned against you since the beginning. What had hopefully been quick mission to infiltrate in and infiltrate out turned out to be a lengthy weeks long mission ; alone and vulnerable and similarly leaving your own allies to fend for themselves. What was aimed at being a professional infiltration turned into a tenuous and personal masquerade. When you hoped to find a floor full of the most powerful enemies of the Rose, you found only dark, twisted and hollow corridors where few traces of the mighty prisoners was left to be had and fewer answers still as to why. When the time came to escape, your guise was broken. An entire, painstakingly carried out plan that almost fell through.

Flee, Hero. Flee before the Thorns of the Rose catch you and manage to bleed you. The wise  know to retreat to better fight another day. 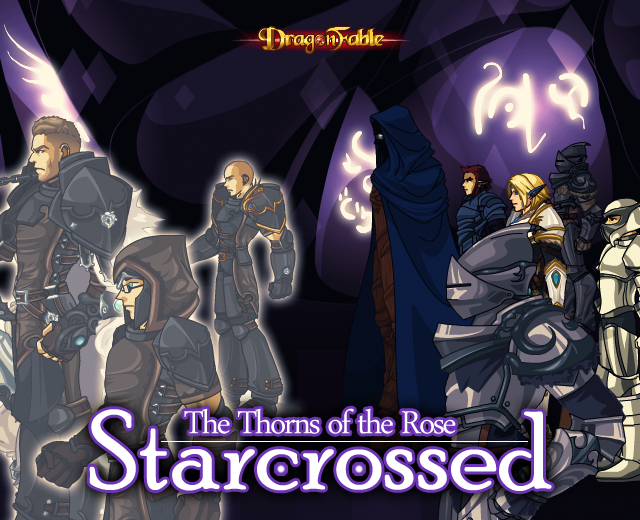 With Espina Rosa having come to a close, I would like to quickly thank everyone. It has been a particular experience to have been able to work with the tireless Team that heads Dragonfable and to gleen on feedback from the players as they run through and explore the quests as they have with so many others before. Suffice to say, it is an experience one learns much from.

I know that a number of you may wonder about many questions, confoundations and mysteries raised by Espina Rosa even as the main storyline moves on towards Swordhaven. Know that some time in the future... you may get the chance to know more about the strange lore that surrounds Espina Rosa.

Finally... I inquired if you liked little puzzles regardless of whether or not you might earn from them much more than the fun or satisfaction of completing them...
As a last little token of fun, I thus invite you, on the forums over the weekend if you wish, to take part in a little puzzle hunt. Nothing will be lost from not partaking but perhaps a bit of fun. You will notice, I am sure, that the strange words and utterances that wander the dark halls of the Third Floor in  today’s quest... Namely, some letters are quite distinctly different from all the rest.

I challenge you to gather those letters and to sort them out into their true meaning. All of 21 letters must be had to complete the puzzle below.

tips the hood of his cloak A merry weekend to one and all.