Except there won't be any rumbling today.  Not on Rolith's birthday! No fighting allowed, only cake. And cupcakes. And chocolate fondue. Now THAT's an ooey, gooey birthday surprise!  Rolith doesn't know it yet, but in about an hour, everyone in the Secret Underground Lab is going to crowd into the DF/AQW room and surprise him with a PARTY!  Whoooooo! 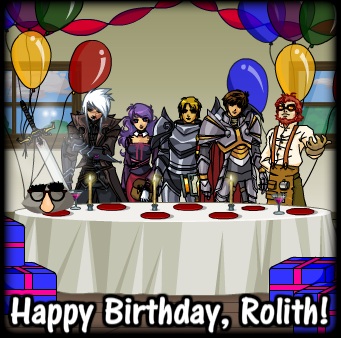 If you'd like to wish Rolith a happy birthday, feel free to use his Twitter (@Rolith_AE) or post on the forum.  We wish we had enough cake for everyone to share, but you all know it's a lie anyways, right? (Except for the breakfast cupcakes he had. Those were real.)  Happy birthday, Rol, from all of us on the DragonFable team, and your Artix Entertainment family!

That was the great fun.  Now here's the good news!  We've got some awesome releases planned for you this week!

Are you ready to continue your adventures with Resident Sneevil: Revelations?  You'd better be, because there's going to be a LOT involved in it!  Including the introduction of the mysterious Tactical Assault Reconnaissance Team....

That's not all, though!  We've also got a Clashening quest planned for this Friday's release!  It's the lead-up to the final quest, and Lim is NOT going to like where Cysero takes his experiment THIS time!  But we've got a VERY pretty star-filled night sky background planned, and hopefully an intergalactic space-monster if Tomix has time.  Anyone got a spool of string to spare? We're going to need it!

And in news of future releases, I promised you guys some information on the voice-acting event that will take place in DragonFable come this November.  (Artix spilled the beans about it in the AQW Design Notes on Friday, hehe!)

The event will star Lim, George Lowe (yes, THE George Lowe of Space Ghost and Cartoon Network fame*), Cysero, and Serenity as judges in our event: Falconreach Idle!  What better way to help Lim find a new Weaponshop assistant than to hold, you guessed it, a TALENT competition?! (Just look at the superstars that have exploded out of all the current TV talent shows.  Our characters are WAY more talented than that! /nod) Contestants will include Aria, YOU, and a brand-new character in a battle to explode into STARdom!

There's your teaser!  I'm off to go hunt down Faith and see where the cake is.  Mmmm, liecake!

Beta for BladeHaven is scheduled to begin on Thursday. The Beta will use the ONE LOGIN TO RULE THEM ALL (Your BattleOn Portal Master Account login!) and will be open to Guardians, DragonLords, Star Captains, AQWorlds Members and... um... we have no idea what Epic Duel players that upgraded are called... but yup, them too. Bladehaven is a first person sword fighting game. It features achievements that will earn your master account EXP.