I'm here, I'm here! It's a Friday, and on Fridays we must pull together and battle on, because it's... RELEASE DAY!  And we LOVE release days!  We're just as excited to get them out as you are to play them, and I wouldn't let a little unexpected illness keep me away from such an important day. No sir!

And I really wanted to thank everyone who posted on the forum and Twitter hoping I felt better. I will definitely be taking your advice and imbibing large quantites of juice and chickencow noodle soup tonight!

So, what do we have for you today?  I have a feeling you guys already know!  Yep, it's a HUGE Friday for us, and here's your release lineup:

If you're a DragonLord and haven't heard the details about the SoulWeaver class (or you're a really really excited free player), scroll down and check out all the awesome bits and bobs about SoulWeaver here!

So head on over to Falconreach, take a moment to take in the beauty of the setting sun, and then click that VERY shiny button which will take you to the screen that will let you load the SoulWeaver class preview!  You've got to have a Dragon Amulet to try it out, though, so if you've got one grab it and go go go! Weave those souls! Gooooooo SoulWeavers!

We've ALSO got a nifty little Ravenloss quest tonight! Yes, that IS two Ravenloss quests in a row! We are moving steadily towards the Ravenloss finale. I HOPE it will release next week, but we've got a TON of things planned for it (like premiering your SoulAllies!), so we want to make it as good as it can be.

But THIS week you'll be racing Greed towards the Bolt Key.  You and Tomix aren't quite sure where it is, and Riadne doesn't remember what happened to it after she was kidnapped, so you've got to find it again! The only problem is... a whole race of crazed ChaosWeavers is rushing your way and they want to take you AND Greed down!  It's a game of skill and chance to corner the ChaosWeavers pitting themselves against you, but if you strategize with Tomix and Riadne, you'll be able to take them down!

Remember, they key to Ravenloss is getting into that Gate, so find that last Key!  For those of you who're fans of the Elemental Gate Key art, here's a pretty picture: 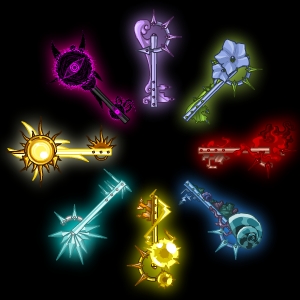 We've ALSO got a WillowShire quest coming tonight, as I mentioned, but Geo's not quite ready with it.  It'll be done in 15 minutes or so.  But we know you're so eager for SoulWeaver, we're releasing it NOW!

Enjoy the weekend and the release, everyone! Remember to check back in a little bit for the WillowShire quest!  Check with Guardian Fortuna for the new Earth Orb quest!