is turning you guys into game designers.

The Player Created Content System is on schedule to go live tomorrow evening! (After a LOT of testing!)

I know I don’t post enough design notes.  We’re going to have to see about fixing that, but with weeks like this one, literally no time could have been spared.  When I wasn’t coding, I HAD to be away from work, by Alina’s orders.

As a personal aside, if you guys want to see the real workforce behind this week, yes I’ve been coding my monkey paws off, but Alina has been right here too, working just as many hours, keeping me company, providing distractions and ordering me away from the computer when I was getting too stressed out, so major props for her.

So, with all that’s come out this week, it’s hard to put into context how huge of a deal I think tomorrow’s release is going to be.   I can’t give it a scale because I don’t think I can explain how much YOU mean to DragonFable.  Tomorrow is all about giving you guys a door where your unbridled energy, enthusiasm and creativity can go to work and help make this game even more of a reflection of the community that supports, sustains and pushes it to become far bigger and better than it was originally designed to be.

That said… there are a few things we need to be completely clear on before tomorrow hits to keep expectations in line.

This is a PREVIEW.  Actually, that’s not fair.  We’ve wanted to do player-created content for as long as I can remember, but we’ve never gone so far as to even prototype it out before this.  That means a lot of what we’re working on is not only untested, but unproven design technology. 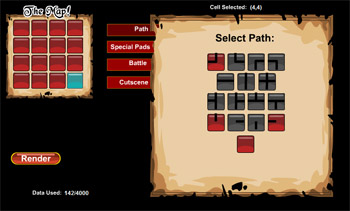 Things will break. A LOT.  Potentially things will be lost and entire quests will vanish into the ether.  This is likely unavoidable. It will be frustrating for you, but just remember how much of work has gone into this (with the intent of making you as happy as possible) and remember I’m not going to stop till we have a solution to as many of the issues as I’m able to practically fix.

Next: There is only one quest template. Templates will eventually be plentiful, they will be tile-sets you can build your map on.  This is because I’m STILL having to change how templates are being laid out, so having more than one at release is not likely to happen.

These will actually probably be the last thing to get added because they’re so time consuming to build and would be incredibly annoying to update if there are any last minute red-flags.  There is also only one monster set, this is mostly because I can’t remember how I was going to load in different msets, so I’m going to hold off till sometime in the future to expand it.  Same goes for NPCs, though I’ll see if I can come up with a couple for tomorrow.

Also, space on the servers is going to be amazingly limited.  Our quest save size is limited to 4,000 characters.  That means your cutscenes, for example, SHOULD BE more than a lot of DF’s quests have to play with if Alina’s estimate are anything to go on (her cutscenes usually max out at a page to a page and a half of dialogue and animation instructions), but you will also have to fit map layout and battles in that same space, as well as data overhead.  So that epic backstory you’re planning might be a bit out of scale at the moment, but we’re working on better solutions to this issue in the future. Honestly, though, these kinds of limits tend to just lead to creative solutions on the part of the designers. And with this new system, that means… you guys.  So think creatively, and concisely.

Lastly, this is an experiment.  A fun one!  Keep that in mind.  If you have constructive criticism on each other’s quests, or you want input, keep in mind that we’re all new at this.  Be friendly, be constructive, and let’s keep things fun for everyone!

So, remember, things will break, things will be limited, but hopefully hard work will pay off and you’ll get to see a small sample of what you’re capable of when you’re given a canvas to go off of.