Today’s been more than a little crazy here in the underground lab.  The majority of the team is back here for the first time since the Holidays began (we all worked around the country for the release last week, and I even visited Alina’s family for the first time up in the cold and windy city of Chicago) .  There were lots of things to talk about and show off (including my new hobby – Crocheting – never let it be said that I don’t have a crafty side, just that it’s not very good. 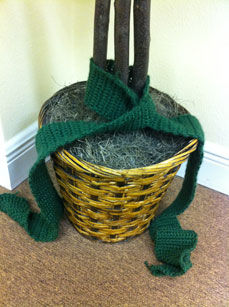 Mister Ficus loves his new scarf (what else was I supposed to do with it in Florida? It’s like 80 out right now).

What all this is leading to was that it took me much, much MUCH longer then I thought it would to increase the level cap today. It should have been as simple as logging in this morning and entering some new data in and pressing go.  It wasn’t.

Let me tell you why, besides the normal and abnormal distractions.

We lost the formula that we use to calculate the exp-to-level.

Yup, lost.  In a digital era as far as I’m aware there is no digital copy of the formula Artix decided on when DragonFable was in its infancy.  We knew this was the case actually.  It’s been true the last couple of times we’ve raised the cap, but we got away with making it close enough that it felt perfect but this time I didn’t want to make it end up the same,  I wanted the formula!  The missing formula wasn’t as big a deal as you’d think, with an office full of geeks, nerds, and coders we were able to backwards engineer it fairly quickly and now have it saved so that it’ll never be lost again.

Seeing the proper code and how simple it was, it was just a matter of extending it up to 70. But I decided to make a couple of small changes to the lower end of the level curve and tweak the formula a bit too.  It now advances much more smoothly in the early game and is in general about 10-20% easier to level then it was this morning.  That is, of course, until you hit 61.  Mwhahahaha.

Alina would like me to send you to post in the following forum link: Best of 2010 shop!

She asks that you please keep in mind the following points when making a suggestion for the shop:

We're looking for the quest rewards that you'd like to see get higher/different levels so that you can use them sooner or for a longer period of time.

Have fun wracking your brains for your favorite rewards, and if you suggest them, maybe you'll see them in the shop on Friday!