It's another Wednesday Sneak Peek, and this one is all about the Ravenloss quest this week!

So, you know that you're headed back to Ravenloss, and you know you're looking for Riadne and the Icicle Key, but what does the key look like? Take a peek at Tomix's "Guide to Equilibrium Gate Keys"! 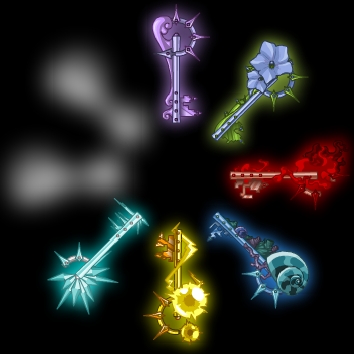 You found the first 4 keys (the Cloud, Flax, Ember, and Shell keys) but did NOT manage to get ahold of the Bolt Key!  If you don't know what happened to it, now's a great time to replay the last Ravenloss quest to get caught up!  The newest Key is the Icicle Key, and you'd better make sure you get your hands on it!  And, while you're searching for it- and Riadne- why not keep an eye out for the Bolt Key? It couldn't hurt!

These keys are so pretty, I think I just might turn them into weapons. They resemble daggers in a way, but we'd have to make them scythes so everyone could use them.  Thoughts on this idea?  If we DO do them, they'd come as end-of-the-Saga rewards. Gate Key scythes: yes or no?

And in case you missed the preview of the Dark Tower Penitentiary's art style in the Design Notes a few weeks ago, here's another look!

It's been a LONG time since we've visited Ravenloss, and we're all happy to get to work on this Saga again!  Remember, it takes Tomix a bit of time to do the art for each quest, but we'll hopefully be alternating Ravenloss quests with Clashening quests from now on so that we can get both chains finished up!

See you Friday for Talk Like a Pirate Day (Ahoy! I spy new booty AND returning seasonal rares!), the Player Suggestion shop, Willowshire and the Dark Tower Penitentiary!

After realizing that we already HAVE a staff member named Geno (he writes for AdventureQuest), we've decided to go with some Kenog and Sator for the Stone and Nature dragons!  Thanks very much to UltraPowerPie, a forum ArchKnight, who became our human anagram-machine and suggested the new names!