hung her stocking up already.

Not too cute to be ebil!

As the sun slowly sets in Falconreach, it's time for you to return to Frostvale.  The kidnapped moglins depend on you!

So open up the Frostval book, take a moment to grab the Red, Green, and Blue presents from the Frostval 2010 shop (accessible in any of the book's chapters) and point your cursors towards Act 11!  You'll be headed into a factory of fear patrolled by the cutest monsters you'll ever have to take down. In fact, you could say you'll have to beat the stuffing out of them! 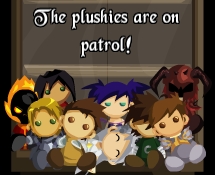 They'll be on the move patrolling the factory, so you'll have to use stealth and dexterity to avoid coming into contact with them.  If you DO, there are three NEW plushie monsters that have been added to the monster group this week: Tomix, Rolith, and Sepulchure plushies! (If you never wanted to cuddle a doomknight before, you will NOW!)

And that's not all we have for you this week! Ghost has made a HUGE walkaround area connecting FIVE zones and towns together; it's sure to keep you exploring for a while! The walkaround path will also take you to a brand-new town, VerdeRoche, one of the greeniest and rockiest towns around!  What will you find there? Who knows? (I don't, I haven't been there yet either!)

And for the third part of tonight's release, we've updated the Falconreach Guardian Tower Arena! For years it's been a single room with the same three monsters from the beginning of the game. Now, Guardian Myra has undertaken to completely revamp the arena, adding four rooms to make a total of FIVE dens of destruction for you to battle your way through! The monsters in them come from quests throughout the game, so you'll probably see some old favorites and maybe one or two you haven't seen in years.  Win your fights and claim your Badges of Valor. Then talk to Guardian Myra (standing to the left of the Arena doors) to merge them together to create one of the following items (made by Ghost and True Mortal):

Our big Frostval event is coming NEXT week and not a single member of the DragonFable team will be at the Secret Undergroun Lab to release it! We're all going home for the holidays to spend time with family and friends.  So if you're planning on traveling home to see loved ones, stay safe and have fun! We'll be here with an update, even if you're a day late to play it.  Just make sure not to miss it, because it's going to be full of presents, plushies, and puns! (What better way to spend the holiday?)