The week after Dragon*Con is always one of chills and fevers. Sickness has been racing through the office and picking us off one by one. (Can a virus be considered undead? Maybe we need to put Artix on this!) Even poor Tomix got hit all the way in the satellite Underground Lab!

Rolith was, unfortunately taken this afternoon in the middle of programming the Bacon Primal. As they walked by the offices chanting "Bring out yer sick!" he was trying to communicate to us how to get it live for you... but between the delirum and fever, I think it's best that we wait until Rolith is well enough to double check his work. Plus, if I had made him stay to finish coding it I would have had a very, very angry Alina...!

Preview Time
Ghost is still hard at work though! He's been working on updating southern Falconreach! 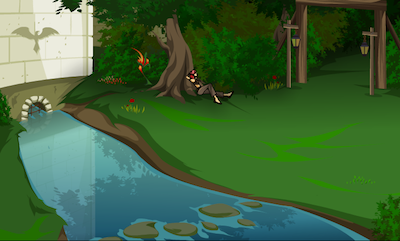 You're seeing a section of the park that outside of the wall by the Bank and Town Hall. Don't worry too much about the opening in the wall for the brook. Ghost assures me that it is very heavily guarded on the other side!

What do you guys think the park should be called?