Welcome to another Friday!  This is a HUGE Friday, and I am cannot WAIT to tell you why! Except if you've read the other Design Notes from this week, you already know.  But if you HAVEN'T, boy oh boy, let me tell you what is coming tonight!

First up, we've got the Clashening quest chain FINALE!  You've come to know Lim and Cysero really well over the course of this quest chain and, if you've learned nothing else, you've learned that where Cysero and Lim get together, there is CRAZINESS! 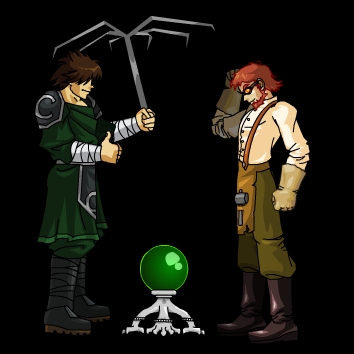 And this quest is no different!  Cysero is sending you off to fight Biff the Buffed-Up Time Tyrant in order to get his Timey-Blimey thingamahickey.  Cysero needs it for... SCIENCE! And MAGIC! What do you get when you pair the two? MAGISCIENCE! Whoooooo! /cheer!

I'm not going to spoil things for you, but let me just tell you now... there is 1- no, 2, no, 3- well, MANY times the Cysero hijinks in this quest, and Lim cannot TAKE it anymore!  Your hero seems to think it's pretty funny, though.  They are really good about taking Cysero and Lim's peculiarities in stride.  I admire that.

To get your rewards for the Clashening chain, you'll need to pick up a Vote item from the end of CyseRedux, then do the "Your Vote" shop-quest in Lim's Clashening section.  Your reward for the entire chain will depend on what you vote for, so choose wisely!

That's right, the nefarious plotting of the Red Queen has finally come to fruition, and you're NOT going to like it!  Thanks to an alteration in her programming (I bet the CEO of Parasol Corp. didn't see THAT coming!), she's declared war on all the non-infected!  Yes, that means YOU!

But... maybe not for long!  You DO have a chance to become infected, and if you do, you can stay in the Zardbie Armor* and continue to fight FOR the infected side!  As you'll see from the two war meters, the amount of the Infected that have been defeated is racing against the number of Infected.  Which side will YOU choose to be on? 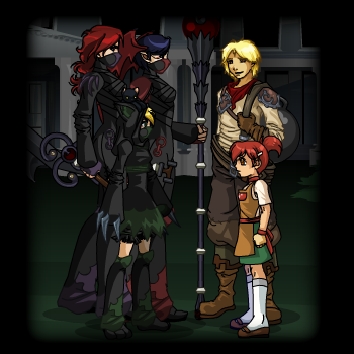 If you DO get infected and want to become uninfected, just talk to the TARTS team.  They'll be right in the war camp, which you can get to from Mogloween.  And since you guys have been asking for cutscenes midway through wars, we'll be having an unlockable cutscene after you battle through 2 million waves! (If, that is, Ghost finishes in time.  It really IS a race!)

The war itself is timed (i.e. the war is going to end next Friday when the boss appears!) and that awesome spy gear we previewed in Wednesday's Design Notes will be in the War Chest, plus depending on which side wins the war, we'll add in a special challenge prize!

* Yes, that IS a new, temporary, just-for-this-war armor we've created!  What do you get when you cross Zards with Zombies?  Zardbies!  Infecteeeeeeed!

We hope you've enjoyed the Clashening quest chain!  It's been a BLAST writing it; Lim and Cysero's characters are so much fun! They're CRAZY!  If you haven't played up through the last quest, you'll definitely want to catch up, because in CyseRedux, there's a TON of wackiness that you'll need to see to believe!

Wel ALSO hope you're enjoying the Resident Sneevil Mogloween storyline!  We've thrown a LOT at you with it, and we're not done yet!  There's still a whole week of October left!

I've got to run! Time to take Miko's leetle Chi-weenie (half-dachsund, half-chihuahua!) home, because she's away and I get to puppysit! /squeal  Enjoy the release!