The war rages on... and now, as Sepulchure's forces are beginning to be forced back in the confusion of his absence from Drakath's betrayal, bone chests are being found! The Talus Chest, Horn Chest and Ossien Chest will drop rarely from the war waves until Sunday midnight, though Cysero has somehow gotten his hands on a few that his Orb is selling for 75 Dragon Coins each in his Superstore.

What could be locked away in these mysterious chests? You'll find out next Tuesday.... but only if the war boss has been defeated!

This week is an all out push to defeat Sepulchure's army while it reels from losing the command of the DoomKnight! True Mortal is working ferverishly on war rewards right now. If you defeat Sepulchure's Necrotic Generals you could wield a new weapon to fight against the darkness! 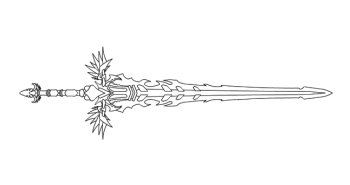 A work in progress!

Coming Soon: Blackwyn Tomb
A mysterious light glows faintly in the darkness of Doomwood Forest.. A tomb lost for centuries has just been uncovered behind Hunter's Paradise! Ilon, the archeologist who found it, would not dare to enter. What kind evil lurks amongst the spirits long since buried there? What is causing the Blackwyn line to walk again? Are you brave enough to explore the tomb and find out?

Ghost has been working on this new map for you to explore in a few weeks and there's sure to be lots of goodies to be uncovered within!